What do I hope Eric Prince will soon have in common with Al Capone? 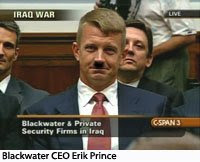 Blackwater accused of tax evasion. From the gang at Think Progress.

In a letter to Blackwater CEO Erik Prince today, Rep. Henry Waxman (D-CA) says he has obtained documents “which suggest that Blackwater may have engaged in significant tax evasion” by labeling their armed guards “independent contractors.” Due to the label, “Blackwater may have avoided paying millions of dollars in Social Security, Medicare, unemployment, and related taxes for which it is legally responsible,” writes Waxman. DynCorp and Triple Canopy, “the two other major private military contractors providing security services to the State Department in Iraq,” classify their guards as “employees.”

I don't know the law, but I'm guessing there's a bunch of bricks being sh*t at Blackwater central.
I'm thinking Waxman should avoid small planes and dark alleys.

JInx! I went with the same headline (sorta). Truth is, Blackwater will likely just have to pay the back tax, interest and penalties (which could be steep), but jail time may be unlikely. Capone got nailed for failing to report any income. Blackwater, on the other hand, will likely try to claim that it took a reasonable position when it treated the mercenaries it hired as independent contractors and did not pay SS taxes. Still, for someone like Prince, paying a lot of money in fines is almost as bad as going to jail. And kudos on the great photoshop.