Tara Stiles is very funny. Watch this or any of her yoga stuff. I'd like to buy her some kind of groovy yogi tea or something just for making this video. 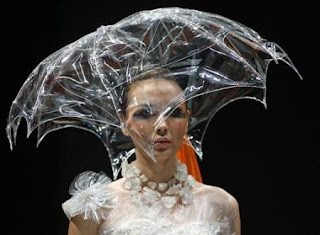 The population boom among jellyfish is far worse than marine biologists expected.
Posted by Sorghum Crow at 12:51 PM 2 comments:

If this isn't obscene, I don't know what is. (From Think Progress)

Chrysler to shut down all 30 plants for a month, but ‘white collar workers’ will keep regular salaries.»

Chrysler announced today that it would shut all 30 of its North American plants for a month, starting this Friday. ABC News reports that while 46,000 union workers will be shut off from their regular paychecks, the “white collar” management will continue to receive their salaries:

These [UAW} workers will not be receiving their regular income. There will be an unknown number of white collar workers who will not be working as well, but the expectation is that they will continue to receive their regular salaries during this time.

Chrysler said that union workers will receive “state unemployment benefits as well as supplementary payments from Chrysler” based off “a union negotiated formula.”
Posted by Sorghum Crow at 9:31 AM 9 comments:

Needs to focus on accuracy.

This video cheered me up on a slow Sunday. 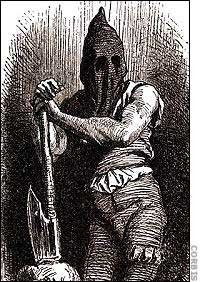 Looks like something is in the air. The word is, we have a company-wide meeting on Monday, though the official email invite hasn't gone out. The rumor mill has plenty of grist. I'm guessing a new series of layoffs before the end of the year so that the bottom line can be boosted an inch or two. Conveniently, the corporate online meeting schedule is offline.... Merry F*cking ChrismaHannaKwanzaka.

I, for one, would love a nice big severance package, but if it come to that, I think I will be at the bottom of the range since I've been here just under two years.

The gentleman pictured has his own idea of what a nice severance is.

59. Visited Russia -- No but I could see it from my apartment

From melancholia-induced bloggy silence to a meme, well it's a start.

I HAVE... (done the stuff in bold)
1. Started my own blog
2. Slept under the stars
3. Played in a band -- if a Kazoo band counts
4. Visited Hawaii
5. Watched a meteor shower
6. Given more than I can afford to charity
7. Been to Disneyland/world
8. Climbed a mountain
9. Held a praying mantis
10. Sung a solo -- to myself and sung might be a generous description
11. Bungee jumped
12. Visited Paris
13. Watched lightning at sea
14. Taught myself an art from scratch -- I cook from scratch.
15. Adopted a child
16. Had food poisoning
17. Walked to the top of the Statue of Liberty
18. Grown my own vegetables
19. Seen the Mona Lisa in France
20. Slept on an overnight train -- but not in a sleeper.
21. Had a pillow fight
22. Hitchhiked
23. Taken a sick day when you’re not ill -- actually it was mechanical difficulties, I couldn't get my *ss in gear.
24. Built a snow fort
25. Held a lamb
26. Gone skinny dipping
27. Run a Marathon
28. Ridden in a gondola in Venice
29. Seen a total eclipse
30. Watched a sunrise or sunset
31. Hit a home run -- baseball or metaphorically?
32. Been on a cruise -- I took deck passage on a ferry from Seattle to Alaska
33. Seen Niagara Falls in person
34. Visited the birthplace of my ancestors -- Depends on how far back you go. never been to the Old World, but did go to south Georgia.
35. Seen an Amish community
36. Taught myself a new language
37. Had enough money to be truly satisfied
38. Seen the Leaning Tower of Pisa in person
39. Gone rock climbing
40. Seen Michelangelo’s David
41. Sung karaoke
42. Seen Old Faithful geyser erupt
43. Bought a stranger a meal at a restaurant
44. Visited Africa
45. Walked on a beach by moonlight
46. Been transported in an ambulance -- bike accident. Bruises only.
47. Had my portrait painted
48. Gone deep sea fishing
49. Seen the Sistine Chapel in person
50. Been to the top of the Eiffel Tower in Paris
51. Gone scuba diving or snorkeling -- snorkeling only
52. Kissed in the rain
53. Played in the mud
54. Gone to a drive-in theater -- My first was a double feature of Goldfinger and Dr. No.
55. Been in a movie -- I'm guessing Super8 mm home movies don't count.
56. Visited the Great Wall of China -- I went to a restaurant by that name.
57. Started a business
58. Taken a martial arts class -- but not a marital arts class
59. Visited Russia -- No but I could see the USSR from my apartment when I lived in far eastern Hokkaido! No Sh*t. But only on clear days, which were few and far between.
60. Served at a soup kitchen
61. Sold Girl Scout Cookies -- Vicariously
62. Gone whale watching
63. Got flowers for no reason
64. Donated blood, platelets or plasma
65. Gone sky diving
66. Visited a Nazi Concentration Camp
67. Bounced a check -- only a couple of times. Hey, look at all the good ones I wrote, why don't you ask about those, huh?
68. Flown in a helicopter
69. Saved a favorite childhood toy -- only if you count the one I was born with, if you get my drift...
70. Visited the Lincoln Memorial.
71. Eaten Caviar -- yum
72. Pieced a quilt
73. Stood in Times Square -- and nobody asked if I was "dating"
74. Toured the Everglades -- The onliest swamps I've visited are the Okefenokee and Washington DC.
75. Been fired from a job -- Laid off, yes.
76. Seen the Changing of the Guards in London
77. Broken a bone -- Ribs, fingers, toe.
78. Been on a speeding motorcycle
79. Seen the Grand Canyon in person
80. Published a book
81. Visited the Vatican
82. Bought a brand new car -- NEVER
83. Walked in Jerusalem
84. Had my picture in the newspaper -- but not the post office
85. Read the entire Bible --Was there a Classic Comics version?
86. Visited the White House -- did not sleep in Lincoln BR
87. Killed and prepared an animal for eating
88. Had chickenpox
89. Saved someone’s life -- maybe, gave aspirin to a visitor where I worked. Turns out he was actually having a heart attack.
90. Sat on a jury -- deadly dull. It was an appeal of a workman's comp claim. All they could do was read the transcript of the previous trial. And the reader didn't even do voices.
91. Met someone famous
92. Joined a book club
93. Lost a loved one
94. Had a baby
95. Seen the Alamo in person
96. Swam in the Great Salt Lake
97. Been involved in a law suit
98. Owned a cell phone
99. Been stung by a bee
100. Ridden an elephant -- No, but the GOP has been riding us for too many years.
Posted by Sorghum Crow at 10:01 AM 2 comments: