Pelosi: Bush 'must come to Congress' before attacking Iran 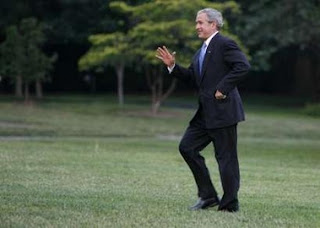 Since when has the Chimperor followed any rules? If he can say the word and get his minions to load and lock, you can be sure he won't go to congress cap in hand.

What are Pelosi and the other invertebrates going to do if Chimpy does go ahead? Stomp their little feet and pout? IMPEACH the muthah.

Now Sorghum, I'm sure that Nancy will write a very harsh letter telling W she is very unhappy after the bombs are delivered and W has ushered in WWIII. Why just the fear of that letter will probably stop him from bringing on the apocalypse. You know, I expect republicans to rape and pillage the treasury when they are in power (and that is their real goal), but I also expect the democrats to try to stop them. This crew of democratic politicians disgust me.

But I think pissed in nyc's version of events is probably more realistic. I'm sure everyone will say "oh gosh, we had no idea! he fooled us again! How could we let it happen!? Let's have some committee hearings and get nothing done!"