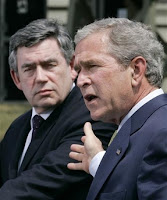 (Larry Downing/Reuters)
"See, see it's like a riddle, heheh. His name is Brown, but he's not brown, and I live in the white house. So what color is the the dawg?"

"An' mah name is Bush, and ya are whatcha eat, but Laura's stayin' in tha Mayflower."

but then i realize that that would be highly inappropriate and i probably shouldn't type it, so i won't.

This was funny as hell. Thanks.

Heres one for you

In an astounding and rare press conference, VP Dick Cheney, has decided to address the growing impeachment movement throughout the country. Highlights of the event came when Cheney personally addressed Congressman Dennis Kucinich during his speech.
Cheney exclaimed,

"...and for you, Dennis, haven't you noticed all the 'I don't recalls' coming out of this administration lately. Once the 4th Branch speaks, nobody remembers. Got it. I suggest that you do the same. Back off with all your 'talk' of impeachment. I can't be impeached, you fool. I'm not even part of the executive. 'I have one foot in both camps'. I run this town, this country, this HOMELAND. Its mine."

Read the full article...you'll love it

The Statements Don Rumsfeld did not say on Camera
http://newssophisticate.blogspot.com/2007/08/statements-don-rumsfeld-did-not-say-on.html

In a shocking backroom statement, Donald Rumsfeld, after his House Committee appearance on the Tillman cover up inquiry ,exclaimed

"...Are you kidding? Do you remember Harry Whittington?...One hunting trip is all it takes....Of course 'I don't recall'. I don't want to eat buck shot. In fact I don't recall anything from the years in which I've known Dick. "

Although I do political humor I also have broken some great news stories as well. Check my full blog. Especially Whose Guarding the Green Zone? and Has Blackwater USA entered Darfur?

Keep up the hillarious work

caption:
George, have you been using Laura's botox?