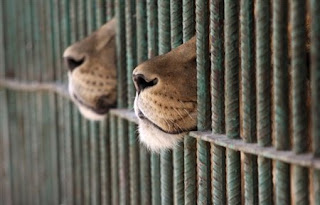 REUTERS/Ali Jarekji
"I hate these blind tastings. Hmmmm, could be Lutheran or Methodist depending on the vintage."

"Yes, but I detect just a hint of evangelical."
Posted by Sorghum Crow at 3:03 PM 2 comments: 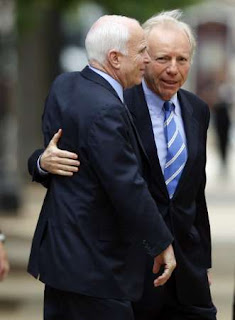 REUTERS/Brian Snyder
But what is up with McCain's and Lieberman's heads? McCain is what? A six and three-eighths? And happy Joe Pumpkinhead? Eight and a quarter?
Posted by Sorghum Crow at 1:24 PM 5 comments:

Strange. This may be a publicity stunt or a prank but here it is:

VERMONT -- People for the Ethical Treatment of Animals sent a letter to Ben Cohen and Jerry Greenfield, cofounders of Ben & Jerry's Homemade Inc., urging them to replace cow's milk they use in their ice cream products with human breast milk, according to a statement recently released by a PETA spokeswoman.

"PETA's request comes in the wake of news reports that a Swiss restaurant owner will begin purchasing breast milk from nursing mothers and substituting breast milk for 75 percent of the cow's milk in the food he serves," the statement says.

PETA officials say a move to human breast milk would lessen the suffering of dairy cows and their babies on factory farms and benefit human health.
click here

"The fact that human adults consume huge quantities of dairy products made from milk that was meant for a baby cow just doesn't make sense," says PETA Executive Vice President Tracy Reiman. "Everyone knows that 'the breast is best,' so Ben & Jerry's could do consumers and cows a big favor by making the switch to breast milk."

In a statement Ben and Jerry's said, "We applaud PETA's novel approach to bringing attention to an issue, but we believe a mother's milk is best used for her child."

On behalf of PETA and our more than 2 million members and supporters, I'd like to bring your attention to an innovative new idea from Switzerland that would bring a unique twist to Ben and Jerry's.

Storchen restaurant is set to unveil a menu that includes soups, stews, and sauces made with at least 75 percent breast milk procured from human donors who are paid in exchange for their milk. If Ben and Jerry's replaced the cow's milk in its ice cream with breast milk, your customers-and cows-would reap the benefits.

Using cow's milk for your ice cream is a hazard to your customer's health. Dairy products have been linked to juvenile diabetes, allergies, constipation, obesity, and prostate and ovarian cancer. The late Dr. Benjamin Spock, America's leading authority on child care, spoke out against feeding cow's milk to children, saying it may play a role in anemia, allergies, and juvenile diabetes and in the long term, will set kids up for obesity and heart disease-America's number one cause of death.

Animals will also benefit from the switch to breast milk. Like all mammals, cows only produce milk during and after pregnancy, so to be able to constantly milk them, cows are forcefully impregnated every nine months. After several years of living in filthy conditions and being forced to produce 10 times more milk than they would naturally, their exhausted bodies are turned into hamburgers or ground up for soup.

And of course, the veal industry could not survive without the dairy industry. Because male calves can't produce milk, dairy farmers take them from their mothers immediately after birth and sell them to veal farms, where they endure 14 to 17 weeks of torment chained inside a crate so small that they can't even turn around.

The breast is best! Won't you give cows and their babies a break and our health a boost by switching from cow's milk to breast milk in Ben and Jerry's ice cream? Thank you for your consideration.

We are so plucked! 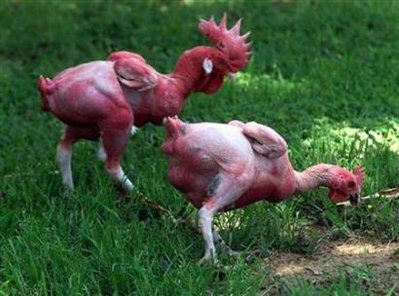 (Havakuk Levison/Reuters)
I'm a day or more behind with this nudie chicken picture, but what the heck.
Posted by Sorghum Crow at 8:37 AM 4 comments:

Friday night at the improv 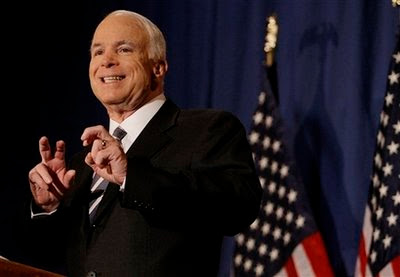 AP/Stephan Savoia via WaterTiger
The pudding cups were delayed, so McCain entertained his supporter(s) with a rendition of Little Bunny Foo Foo. 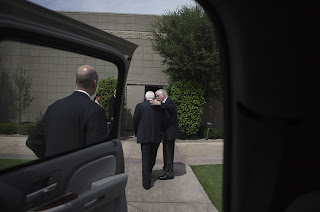 Christopher Morris / VII for TIME
This is where we make the soylent green....
Posted by Sorghum Crow at 10:04 AM 1 comment:

Martha Stewart: ‘I would feel weird, really weird’ about having a president who can’t use a computer.

Today, Martha Stewart dedicated her show to blogging, featuring Politico bloggers Jonathan Martin and Ben Smith. Stewart pointed out that Sen. John McCain (R-AZ) — by his own admission — doesn’t know how to use a computer, and said she would feel “weird, really weird” about having a president who doesn’t understand “the most current mode of communication.”

She neglected to add that McCain could not create a fully animated Rose Parade float using only pre-worn orange jumpsuits, soiled sheets, twelve rubber bands, and a broken bicycle. 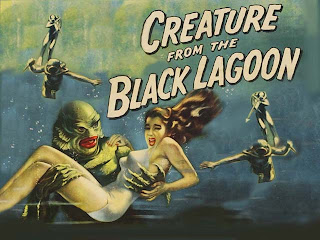 (From The Museum of Unnatural History)
I think Sarah dropped her glasses. (And Fred should really get a manicure.)
Posted by Sorghum Crow at 1:32 PM 4 comments:

I saw this at Rising Hegemon. It's worth two looks.

Angry Scotsman newly minted American tells it like it is.
Posted by Sorghum Crow at 9:42 AM 1 comment:

I've never actually purchased a National Enquirer, but this is one for the ages.

The Enquirer’s team of reporters has combed the Alaskan wilderness to discover the hidden truth about Gov. Palin’s family, which has become a central part of political identity.

The ENQUIRER has learned exclusively that Sarah's oldest son, Track, was addicted to the power drug OxyContin for nearly the past two years, snorting it, eating it, smoking it and even injecting it. And as Track, 19, heads to Iraq as part of the U.S. armed forces, Sarah and her husband Todd were powerless to stop his wild antics, detailed in the new issue of The ENQUIRER, which goes on sale today.

THE ENQUIRER also has exclusive details about Track's use of other drugs, including cocaine, and his involvement in a notorious local vandalism incident.

The source also divulged the girls would do anything for Track and he’d use his local celebrity to manipulate other guys “to get them to steal things he wanted.”

“He finally did what a lot of troubled kids here do,” the source divulged. “You join the military.”

And as Gov. Palin has billed the state of Alaska for various expenses related to her children, as reported by The Washington Post, The ENQUIRER's investigation reveals that she was so incensed by 17-year-old Bristol's pregnancy that she banished her daughter from the house.

Another family friend revealed pre-prego Bristol was as much of a hard partier as Track was.

“Bristol was a huge stoner and drinker. I’ve seen her smoke pot and get drunk and make out with so many guys. All the guys would brag that the just made out with Bristol.”

When Sarah found out the teen was pregnant by high schooler Levi Johnston, she was actually banished from the house. As part of the cover-up, Palin quickly transferred Bristol to another high school and made her move in with Sarah’s sister Heather 25 miles away!

And the ENQUIRER also learned that Levi Johnston, the baby mamma’s future wedded dada, who was glad handed by John McCain at the GOP Convention, isn’t too happy about his impending shotgun nups either.

“Levi got dragged out of the house to go to Minnesota,” Levi’s friend told The ENQUIRER. “Levi realizes he’s stuck being with Bristol because her mom is running for Vice President.”

The friend also confided that both Bristol and Levi “broke up a few times and they definitely messed around with other people.”

Meanwhile, as members of the Palin family’s war viciously over “Trooper-Gate” and claims of Sarah’s extramarital affair have turned the political race into a chaotic arena of threats, denials and vicious attacks by political black ops, The ENQUIRER has discovered shocking new details about the red-hot affair scandal!

For the full story of the secrets Sarah Palin is trying to hide – pick up the new ENQUIRER!

Election Shenanigans get the observer arrested. The story is at Bradblog.

Pima County (Tucson), Arizona Election Integrity advocate and expert John Brakey was arrested last night while performing his job as an election supervisor, on behalf of both the Democratic and Libertarian parties, during a post-election hand-count audit of ballots.

Brakey becomes the latest in a growing string of EI advocates to be arrested and/or barred from observing (Brakey was lucky enough to merit both "honors" apparently) while attempting to assure accuracy, fairness, and transparency in voting and in the reporting of election results on behalf of citizens.

The problem erupted after Brakey had noticed a number of ballot bags being counted in the post-election audit were missing their proper security seals. He began to ask questions about those bags, which eventually led to his arrest at the demand of Pima County's Brad "Election Director Gone Wild" Nelson, a man with whom Brakey has had a number of unfortunate (for Nelson) run-ins over the years.

John McCain was a prisoner in Vietnam. So was Gary Glitter, and I'm not voting for him either.
Here it is.

Palin and McCain to discuss strategy 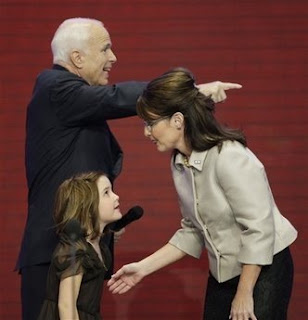 http://www.buzzfeed.com/scott/accidentally-inappropriate-campaign-photo
Piper, honey, run along Granpa and I have some things to talk about.
Posted by Sorghum Crow at 12:15 PM 7 comments: