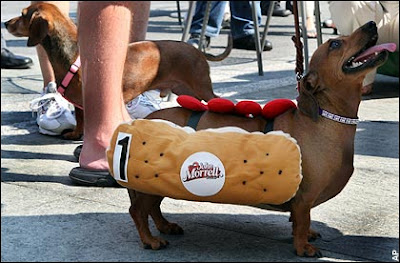 News from the UN 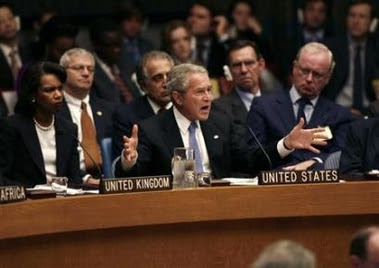 Members of the United Nations General Assembly look on as Pretzeldint Bush once again relates how he caught a perch in a stocked pond on his "ranch" in Crawford, Texas, USA.

"That sucker was this big! Really."
Posted by Sorghum Crow at 9:58 AM 6 comments:

I wish I could say this was unbelievable 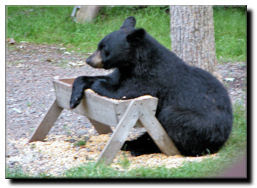 The US forces take a page from the trophy hunter and poachers' bible. The US forces are luring in Iraqis so they can shoot them. This is called baiting. Here is the link.

The picture above is a bear at a bait trough. Could you, would you, should you shoot it? I am not viscerally anti-hunting by any means, but baiting just seems like cheating. You might as well shoot a pig in a sty (and pork tastes a lot better than bear.)

Baiting Iraqis is beyond the pale. In many states baiting for game (by hunters) is illegal. And I would add that in all states, I think it is unethical.

But as an anti-insurgent tactic, it is unbelievable. In a culture where so much is missing, any found object is a tool not necessarily a weapon. Why even bother with the snipers? Let's just put out shiny geegaws that explode when they're touched, or poison the drinking water.

Why do I always have to sit with the wackos? 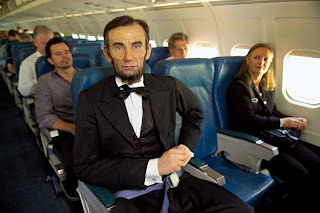 Madame Tussauds flew its wax statue of Abraham Lincoln to D.C. on a Delta Shuttle flight on Thursday. Abe rode in the coach section with regular, non-presidential passengers. As for how they got him to sit down, a spokeswoman informs us that he will be depicted in a seated position in the wax museum, which opens in Penn Quarter on Oct. 5th.

As long as he's not in an emergency exit row, I'm cool with it.
Posted by Sorghum Crow at 10:47 AM 7 comments: 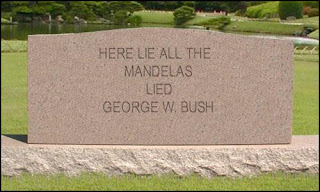 and Saddam killed them all. Damn that Saddam was a busy man. Go see Distributor Cap. D-cap is in an undisclosed location (NEW YORK).
Posted by Sorghum Crow at 10:09 AM 4 comments:

What would Scooby Doo?

Very disturbing article in the Telegraph.

Saudi Arabia has refused to cut interest rates in lockstep with the US Federal Reserve for the first time, signalling that the oil-rich Gulf kingdom is preparing to break the dollar currency peg in a move that risks setting off a stampede out of the dollar across the Middle East.

Non-fiddlers, please feel free to print out and color the picture of Scooby Doo above while the economy burns.
Posted by Sorghum Crow at 1:08 PM 2 comments: 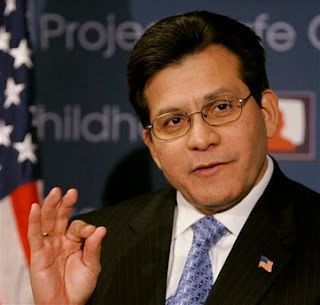 "What have you been doing since you left Washington?"
Posted by Sorghum Crow at 12:48 PM 4 comments:

In a surprise announcement 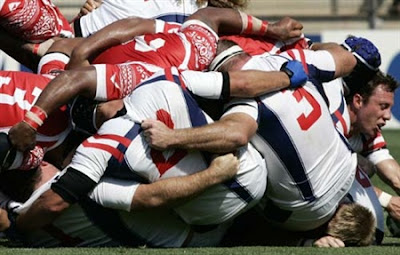 Reuters- Steve Holland
Sen. Larry Craig (R- Concourse C, Stall 3) says that he will follow through with his intention to leave the Senate. He has accepted a "position" as the color commentator for Men's Extreme Twister on ESPN13. 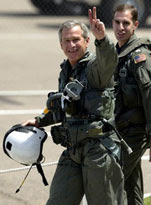 This is from Think Progress. Colonel Codpiece has indicated that he would like to serve in Iraq.

The Washington Post’s Dan Froomkin highlights comments made recently by President Bush to a group of military bloggers. Blogger “N.Z. Bear” reported that Bush told the group he wishes he could be serving in Iraq — except that he’s too old: Responding to one of the bloggers in Iraq he expressed envy that they could be there, and said he’d like to be there but “One, I’m too old to be out there, and two, they would notice me.”

(and three, my daddy says I don't have to go.)
This is such hogwash. It boggles the mind that this draft dodging, duty avoiding piece of excrescence could even form the words. We all know he is a chickenhawk of the yellowest belly. Have the bald heads finally got to him?
Posted by Sorghum Crow at 1:53 PM 6 comments: 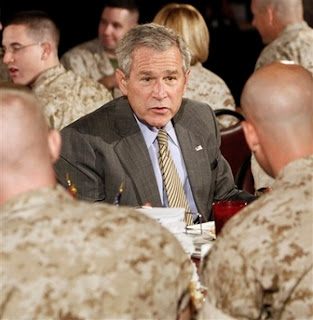 How are you going to keep them down on the farm? 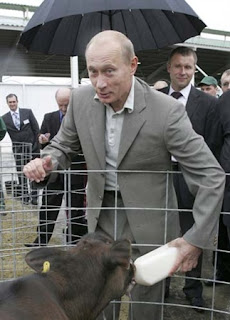 A bemused Vladimir Putin looks on as George Bush tries to explain to Condaleeza Rice just what he is doing with the milking machine.

"It vas badenov when the first lady stopped to check out the AI* technology," Putin forgot to say.

(* on the farm AI does not stand for artificial intelligence....)

I'l be your server tonight 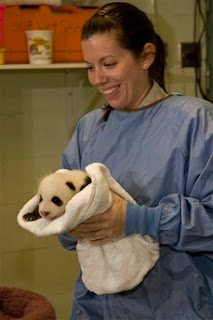 Here's your panda roll Mr. Cheney. I'll be right back with your wasabi kitten kabobs.
Posted by Sorghum Crow at 9:02 AM 3 comments: 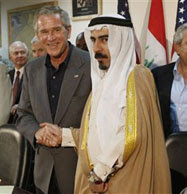 Frank Zappa realized that he was actually in Hell....
Posted by Sorghum Crow at 11:21 AM 6 comments: 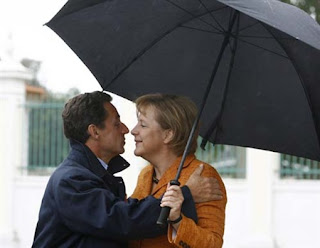 "Whut does that miserable little frog have that Ah don't?" George was not heard to say.
What does it say when a Frenchman is more popular with a German than a faux Texan? At least George still has Condi.... 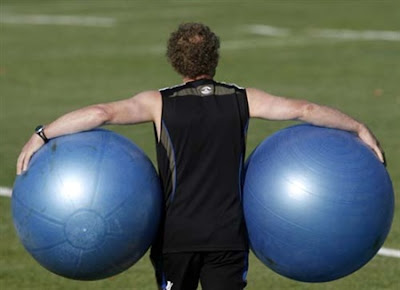 REUTERS/Bogdan Cristel
The Dems may not even have the testicular fortitude to sign for these.
Posted by Sorghum Crow at 11:36 AM 3 comments:

Yes, Virginia there is a caption contest 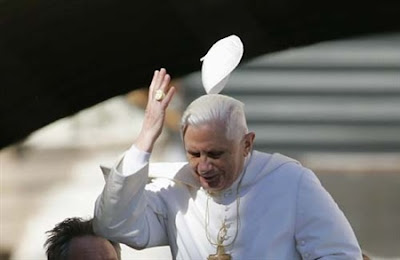 REUTERS/Max Rossi
(a caption contest, have at it)

Yes Virginia, there is an Easter Bunny.

"I know, I know, but I didn't want to infringe on Hugh Hefner's trademark."
Posted by Sorghum Crow at 11:30 AM 8 comments:

The latest from Winnebago 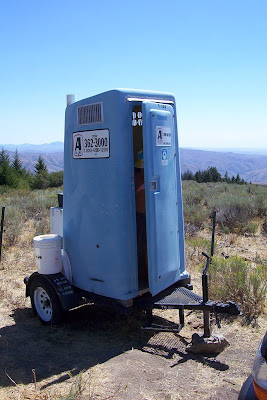 When asked about his post senate plans, Larry Craig says that he plans to do more camping. His customized travel trailer is shown above.
Posted by Sorghum Crow at 11:51 AM 8 comments: 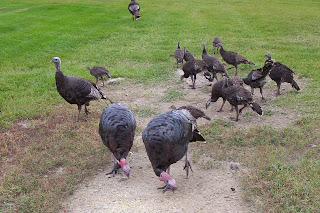 I should go away more often. I got more comments for leaving than I do for my snark. Morse pegged it, Idaho, and Mr. Debakey confirmed it by looking at the image names. (cheater!)

I'm back, did I miss anything...? But seriously the news in Idaho is interesting, for some reason it was all Craig all the time. You'd think he was a hypocritical (partly) gay republican who got caught trying to hook up in a men's room or something.

And I did layover in the Minneapolis-St. Paul airport on the way out. And the answer is no. Too bad I didn't know what news was about to break or I would have taken some pictures. As airports go, it's more mall-like than most, good selection of foods, and you can even buy fried cheese curds at the A&W. It's sad when the airports are the highlight of the travel. Airplanes are only marginally less crowded than a Tokyo subway.
Posted by Sorghum Crow at 11:07 AM 3 comments: