And now for something completely different

Methinks the moose is a little too comfortable. I wonder if it's house trained.
Posted by Sorghum Crow at 4:35 PM 6 comments: 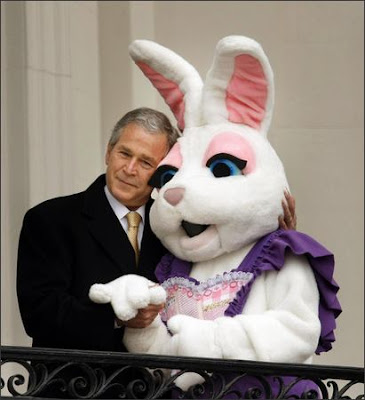 The vice president is a delusional miscreant. I think he meant the biggest bunny is carried by the Resident.
Posted by Sorghum Crow at 10:23 AM 4 comments:

When, oh when does thin ice turn into deep doo-doo?

The Washington Post has a must-read story on this today:

“Because we had a cold winter, the public might think things have gotten better,” said Walter Meier of the National Snow and Ice Data Center at the University of Colorado at Boulder. “In fact, the loss of the perennial ice makes clear that they’re not getting better at all.“

Flying over the Arctic, one might perceive the sea ice cover as broad, Meier said, but that apparent breadth hides the fact that the ice is so thin. “It’s a facade, like a Hollywood set,” he said. “There’s no building behind it.”

The BBC also has a great story. Be sure to check out the graph that shows how perennial sea ice has declined.
Posted by Sorghum Crow at 10:55 AM 6 comments: 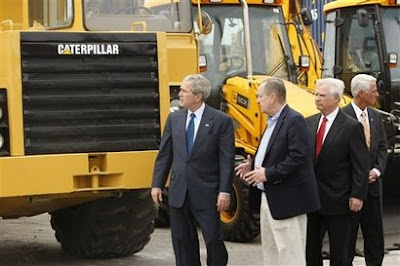 AP Photo/Gerald Herbert
"When do it turn into a butterfly?"
Posted by Sorghum Crow at 10:35 AM 1 comment:

Quote of the day

From the ever-vigilant Silent Patriot at Crooks and Liars:

When Bear Stears was sinking, the Fed threw them a $30 billion lifeline — one we’re expected to pay for. When NOLA was sinking, Bush spared them 10.5. Tells you where the priorities lie, huh? 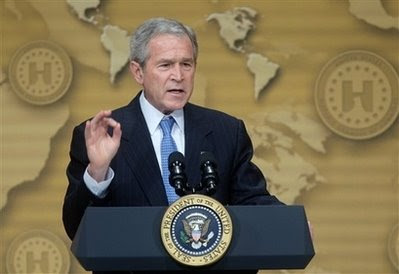 This might be a parody....
I stole borrowed this from here.
Posted by Sorghum Crow at 1:55 PM 1 comment: 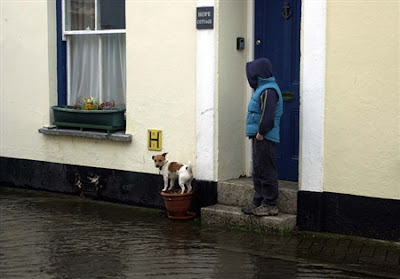 Fun (for everyone but the dog) picture from Reuters.

A dog stands on a flower pot in the flooded village of Flushing, Cornwall, southwestern England March 10, 2008. A storm rushing in from the Atlantic lashed the south west on Monday as high winds and tides brought the risk of coastal flooding.

I think the writers of Bush's parody did not remember or understand the last verses of the song....

Last night, President Bush “said an early farewell to political Washington,” making his first appearance on the stage of the Gridiron Club of Washington journalists. At the event, Bush sang to the tune of “Green Green Grass of Home” about his upcoming return to Texas:

“And there to meet me is my mama and my papa, down the lane I look and here comes Barney, heart of gold and breath like honey; it’s good to touch the brown brown grass of home.” […]

“For there’s Condi and Dick, my old compadre, talking to me about some oil rich Saudi, but soon I’ll touch the brown brown grass of home.”

“That old White house is behind me, I am once again carefree, don’t have to worry ’bout a crisis in Pyongyang. Down the lane I look, Dick Cheney is strolling with documents he’d been withholding, it’s good to touch the brown brown grass of home.”

Bush called his performance “the first and final performance of George Bush and the Busharoos.” (See the original song lyrics here.)

For those that don't remember the Welsh nightingale Tom Jones singing this check out the last two verses:

Then I awake and look around me
At four gray walls that surround me
And I realize that, yes I was only dreamin'
For there's a guard and there's a sad old padre
Arm and arm we'll walk at daybreak
Again I'll touch the green, green grass of home

Yes, they'll all come to see me
In the shade of that old oak tree
As they lay me 'neath the green, green grass of home

I will be glad for the Chimperor to touch the brown, brown grass of home especially if he is in a cell waiting for his final morning....
Posted by Sorghum Crow at 10:41 AM 2 comments: 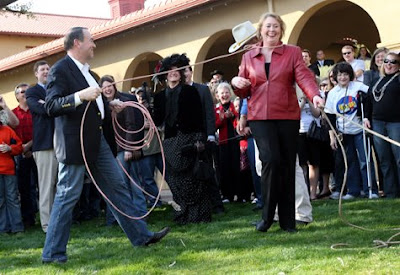 Rick Gershon/Getty Images
Here's the contest.
What is the Huckabees' safe word/phrase?
As I understand it, the safe word is one that a person would not use in the normal course of "events". So, I'm guessing "Fried Squirrel!!!" is out for these two lovebirds.
Posted by Sorghum Crow at 11:54 AM 7 comments:

Do we want another

Being a senator not a ‘high priority’ for McCain.

John McCain (R-AZ) has already missed 57 percent of the Senate votes this session. Today, The Hill reports that McCain will likely continue to “steer far away from his day job in the United States Senate” in order to avoid “politically sensitive votes.” Campaign adviser Sen. Sam Brownback (R-KS) confirmed that voting in the Senate isn’t “a high priority” for McCain.

I can't bear the sight of McCain, so this post will go unillustrated.
Posted by Sorghum Crow at 11:22 AM 2 comments: