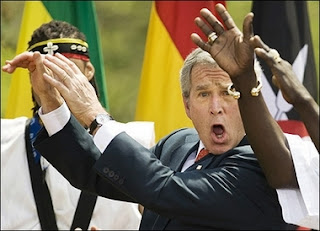 Bush: ‘war on terror’ critics are ‘disingenuous or naive.’

Today in his speech at the Heritage Foundation, President Bush attacked critics of the term “war on terror,” saying that “people who deny we are at war are either being disingenuous or naive.” He added, “We are at war — and we cannot win this war by wishing it away or pretending it does not exist.” ...

I'm sure the folks over at the Heritage Foundation are still toweling themselves off.

I would pay good money to see some one ask him, "What does disingenuous mean?"

Possible response: "Well it means, won't get fooled agin while our childrens is learning."
Posted by Sorghum Crow at 3:23 PM

Ah, c'mon, it took him two whole weeks to learn those words and catapult them out there...

He didn't learn them. He just said them.

He is such an ass!

Exactly, Fran. Just like when he defined sovereign nations as nations that have sovereignty, right?