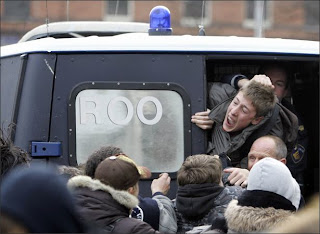 A little roo-roo.
Seriously the door on that paddy wagon is a little disturbing.

Police officers arrest a student during riots in Amsterdam. Police clashed with high school students in several towns and cities in the Netherlands, on the second day students went on "strike" to protest government plans to increase the number of hours they must remain in school. At Amsterdam's Museum square, riot police used water cannons against some of the 1,000 demonstrators and charged them on horseback after students pelted them with apples, eggs and bottles. (AP Photo/Peter Dejong)
(November 26, 2007)

At least the protesters weren't in America, where they all would've been tasered or shot.