The world's most realistic hand puppet 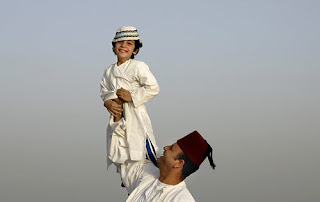 A father from the Ancient Samaritan community holds up his son during a pilgrimage marking the end of the holy day of Passover at the religion's holiest site on Mount Gerizim near the West Bank town of Nablus, early Monday. According to tradition, the Samaritans are descendants of Jews who were not deported when the Assyrians conquered the area in the 8th century B.C. Of the small community of close to 700 people, half live in a village at Mount Gerizim, and the rest in the city of Holon near Tel Aviv. (Seattle Times)