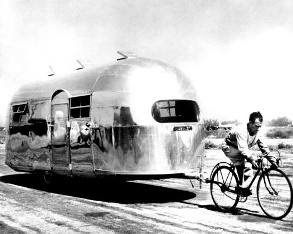 This is not me.
Not commerce per se, but shameless none the less. For those of you looking for a worthy cause, how about supporting cancer research by sponsoring me in the Prouty. I'll be cycling my first century (100 miles) to celebrate, commemorate my first half century on this planet.
Donate here. If I get enough donations, I get a new set of curb feelers and a half pair of fuzzy dice.

We are all of us affected by cancer. I recently found out that my father's cousin's son (I'm from the south so I should be able to just whip out the relationship, I think he would be my second cousin once removed, feel free to correct me) has been diagnosed with cancer that is pretty far along. His mother will be 99 next week, a little hard of hearing, but bright eyed and sharp as a tack. I hate for her to have this burden. It's extraordinary to think of, but her grandparents could remember when Lincoln Davis was president. Wow. I'll have to dig out my family tree.
Posted by Sorghum Crow at 1:00 PM

Sorghum: I donated some cash for a 5K run raising money for Brain Cancer research last week because a friend was running on behlaf of a law school buddy fighting brain cancer. Yesterday, I made a donation to the Albert Einstein Cancer Center in memory of my uncle's sister who died of cancer last week. So I had to chip in for your bike ride. Good luck and thanks for doing this.

You are too good! Thank you.

Have a great ride, Sorghum.