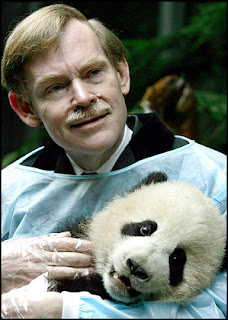 AP Photo/Elizabeth Dalziel
Yes, the panda man is back. The Huff Post reports:

President Bush has chosen Robert Zoellick, a one-time U.S. trade representative and former No. 2 official at the State Department, to lead the World Bank, a senior administration official said Tuesday.

Bush will announce his decision on Wednesday.

From the earlier story, "You want to know how the panda felt?" he asked. "Very soft."

My guess is that the panda felt very threatened when being held by John Bolt-on's scary cousin.

If you recall Zoellick was passed over for the treasury sec position and left the administration in a snit. (or something like that).
Posted by Sorghum Crow at 5:13 PM

why do I think of William Macy's role in Fargo when I see that photo?

Okay, now I have to see Fargo. It's one of the cultural referents that I have somehow missed.

Sorghum: It will be worth your time.