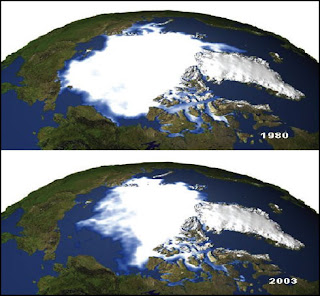 WASHINGTON (Reuters) - The Arctic ice cap is melting much faster than expected and is now about 30 years ahead of predictions made by the Intergovernmental Panel on Climate Change, a U.S. ice expert said on Tuesday.

This means the ocean at the top of the world could be free or nearly free of summer ice by 2020, three decades sooner than the global panel's gloomiest forecast of 2050.

No ice on the Arctic Ocean during summer would be a major spur to global warming, said Ted Scambos, a glaciologist at the National Snow and Ice Center in Colorado.

Open water is a major heat absorber. Ice is a great reflector. Less ice, more heat, warmer water. Warmer water, later freeze in the fall and less ice, and so on and so forth. Blather, rinse, and repeat. This is the worst news that's come out in while.
Posted by Sorghum Crow at 10:42 AM

But Al Gore is still fat.

And you haven't even mentioned the missing honeybees. No worries, it only affects fruits and nuts and some veggies. Sigh.