Mr. McCain, there's a transmission for you on the Marconi apparatus... 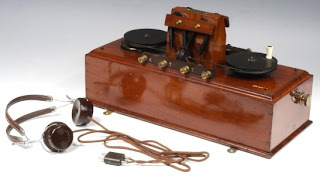 Anna Quindlen makes a good point in this week's Newsweek.

The terrorists have laptops in their hideouts. Can America afford to have a leader who is just learning how to use one?
Honest Abe was a techie. Yep, it's true. President Lincoln pushed hard for the spread of telegraph lines across the country and used the new medium to make communications with his generals during the Civil War swift and specific. Sometimes he even slept on the couch in the telegraph office when he was monitoring battlefield conditions. In his book "Mr. Lincoln's T-Mails," author Tom Wheeler brings the language of Silicon Valley to Gettysburg. "Lincoln's early-adopter instincts," he writes, "coupled with his being unburdened by the old dogmas, allowed him to outperform his generals in the ability to see change and harness it to his purpose."

Paging John McCain. Or at least calling him. Because he doesn't text-message. Or have a BlackBerry. Or use e-mail. Anyhow, he might want to pay more attention to Lincoln's successful future-think.

Read the whole thing, it's interesting.
Posted by Sorghum Crow at 3:25 PM

Wouldn't it delightful to have a president who had some intellectual curiosity?

wouldnt it be nice to have a president who had a brain, an even temperament and didnt curse at his wife in public or give massages to world leaders

wouldnt it be nice if the american public would wake up

This is a real problem. I have a 85 year old friend who can use a pc and a cell phone with ease, it is not his age.

It a matter of his invincible ignorance and intransigence. The future is now. He is so yesterday.

Hey, he was POW---quit attacking that patriot! Why do you guys hate America?