More than you want to know about Chimpy's toileting

This is a rerun, but after I heard Jon Stewart comment that Bush is the most traveled president ever, I go to thinking about TOILSEC again. Are they saving all his excreta to fill the Bush Library and Stink Tank? 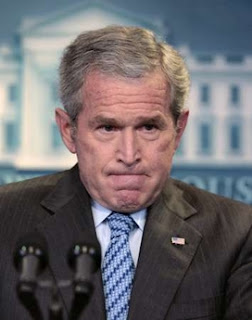 Check this out. No one but a two-year old is this concerned with excreta.
And this extract from the original at Kos.

According to our Austrian sources, Austrian newspapers are currently abuzz with special security details of George W. Bush's recent trip to Vienna. Although the heavy-handed Gestapo-like security measures meted out to Viennese home owners, business proprietors, and pedestrians by US Secret Service agents and local police before and during Bush's visit received widespread Austrian media attention, it was White House "toilet security" ("TOILSEC"), which has Austrians talking the most. The White House flew in a special portable toilet to Vienna for Bush's personal use during his visit. The Bush White House is so concerned about Bush's security, the veil of secrecy extends over the president's bodily excretions.

Is this why he had to write a note to Condi about going to the little boys' room. Is she in charge of TOILSEC?
Posted by Sorghum Crow at 4:00 PM

And the Hitlerian reference... no surprise. No surprise at all.

Thanks for the link, Sorghum.

It surely couldn't be because they are afraid of a drug/alcohol scan?

Incredible connection you made in that last line -- pure genius!

I once heard that, prior to Nixon's historic trip to China, US secret service agents sent out to do reconnaissance discovered that the lacquer used on toilet seats in Chinese hotels contained the toxic oil that's in poison ivy and sumac. Any guesses as to how they "discovered" that?

I have read somewhere that the CIA (or another spy agency) wanted to know what was going on with an African dictator visiting the White House/embassy/etc. So they rerouted the plumbing and diagnosed the poop for drugs/disease/ etc.

Bush's poop would show he's on several different anger management drugs, cocaine, meth.... and he's diseased from his brain to his toes...

What the heck is going on with these comments? Was I so prescient about what you were GOING to write in 8 months that I could comment on it back in 2007? Oh, I see. It's a rerun. Got it.