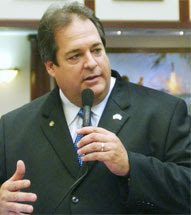 Raw Story has this one. Seems Bob Allen was arrested at a park bathroom offering to orally gratify an undercover policeman for $20. (Methinks he had a rather overvalued opinion of his merits. The police, in turn, had another sort of blue-light special in mind.) The story was sordid enough, and then we find out the guy pictured above is McCain's Florida Co-chairman. From the article:

McCain said he was proud of the support he received from Allen and that Allen and his three co-chairs were "respected leaders in their communities and have real experience wrestling with the important issues of our day."

Wrestling experience? hmmm. And guess what? Allen has a strong conservative record and voted with the Christian Coalition 90% of the time.

The Hypocrites' Hall of Fame/Shame has announced plans for an extensive expansion.
Posted by Sorghum Crow at 11:51 AM

He takes a licking and keeps on ticking.

McCain must really be short of campaign cash.