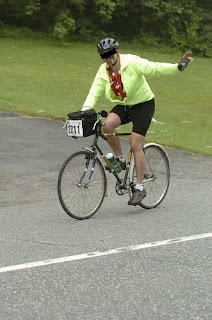 Thanks to everyone for all for the monetary and moral support. On Saturday, I rode 100 miles on my rusty trusty wheeled steed. The ride as a whole raised over $1.5 million for cancer research. I was not the oldest rider, but probably had the oldest and funkiest (in the best sense of the word) bike. (Just think of the Johnny Cash song, I Got It One Piece at a Time. I estimate that it was older than at least half the riders. My bike is mostly a '67 Dawes Galaxay (from England) that was rescued from the Salvation Army. It's been somewhat updated (and for any bike geeks, converted to a single-speed fixed gear with fenders.) I met a few people on similarly classic or eccentric bicycles, and was duly shunned by the folks on high-zoot wheels whose shoes cost more than my bike.

The scenery was great, including mountains, rivers, lakes, roadkill, nature stuff, and my favorite sight along the route, a giant plastic rabbit. It looked like an escapee from a carnival ride or maybe a beached pedal boat. I told a young rider that I thought I was having an acid flashback. He gave a weak, not quite laugh. Then I noticed he was a team member from the Valley Bible College cycling club. Whoops. At least I hadn't made any hooker jokes.
(original photo by Dan Grossman)
Now back to our regularly scheduled snark.
Posted by Sorghum Crow at 10:34 AM

I hear you should watch out for those Valley Bible College cycling club people. They take cyclical redundancy very serious.

Plus, they're saved, and you're not.

But I'll get their bikes after the rapture, not that I plan on being unfaithful to my golden oldie.

I think once the GOP learns that they cannot take it with them, they will lose interest in the Rapture.

Hey, thanks for visiting my blog and, let's hear it for old English bikes! Mine is a Raleigh 3-speed. I'm not a mechanic (and I don't play one on television) so it gets its tune-up periodically and that's it. We're nearly inseparable.

Do you engage in "the pernicious habit of coasting"? (That phrase has been stuck in my head since I read it on Sheldon Brown's site at the beginning of summer.)