Imus gets his nappies in a twist 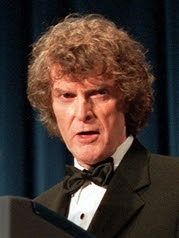 All-round miscreant and bon vivant Don Imus said he is a good guy who said a bad thing.

The guy is an idiot who occasionally who rarely says anything intelligent. He usually hides behind his minions who say outrageous things. Imus then feigns offense at their comments.

I'd like to see the Rutger's team challenge him to a five on one game and run his wrinkled white butt up and down the court till he dropped.
Posted by Sorghum Crow at 10:31 AM