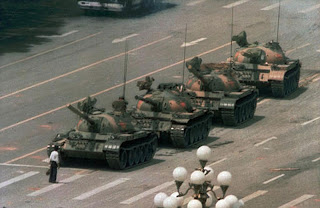 I remember watching this unfold on CBS. My mom was ill and we were watching tv together in her room.

My mom was born in 1914 and was very "American" and hated "Commie Chinese bastids" and had a lot to say about this.

I think if my mom were still alive her heart would be broken over what our own country has become.

I'll never forget seeing that image, seeing how small that one guy looked compared to those huge tanks. And now, because of our addiction to plastic shit sold at WalMart, we're in hock up to our eyeballs to China.

Wonder if the tanks will roll on Times Square one day.

I see this and I remember Kent State. it can happen anywhere -- and has.

and I fear it could happen here again in the not too distant future if we aren't very, very careful.

I wonder what happened to that guy. What guts. I want to believe that he somehow escaped prison and has been living a good life.

and now the olympics...... nice reward for being so humane

I wrote a book review at my blog, of a book about West Virginia coal miners. The army has been called in against U.S. citizens on plenty of occasions and it isn't pretty.