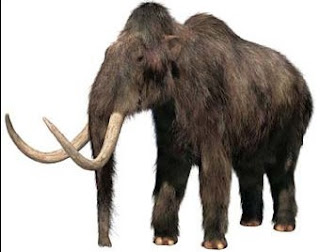 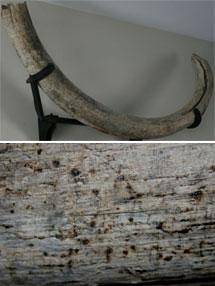 The 'bullet holes' in this tusk are
found only on the skyward side.
Firestone et al.
This story from Nature is just amazing.

Mammoth tusks show up meteorite shower
Fossils could provide a new gold mine for micrometeorite hunters.
Rex Dalton
Bullet-like pieces of what is thought to be an ancient meteorite shower have been found embedded in mammoth tusks and bison bone. The discovery of the 2–5 millimetre holes left by meteorites opens a window into a impact event thought to have happened over Alaska and Russia tens of thousands of years ago. And it could provide a whole new way to chart impacts from space.

The fragments, found in seven mammoth tusks and the skull and horns of a Siberian bison, match the geochemical composition of iron meteorites. "We think that the micrometeorites came from an air-burst of a meteor 30,000 to 34,000 years ago," says Richard Firestone, co-author of the study and a chemist at the Lawrence Berkeley National Laboratory in California. "We think a wave of meteoric material sprayed the region."

May I recommend that you take a reinforced umbrella if you venture outside on Thursday night. See related story here about the Geminids.
Posted by Sorghum Crow at 8:47 AM

How cool is that? Thanks for posting this, a refreshing break. I am restraining myself from making a snarky comment. These times have warped me.

Fran: If the times didn't warp you, then something would be wrong with you.

Below are the most recommended bitcoin exchangers (BUY/SELL):
Coinbase: $1 min. transaction
CoinMama