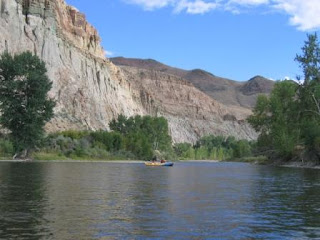 Photo by me
From Nature News

Human activity is largely to blame for the worsening water shortages in the western United States over the past half-century, a new study shows. The analysis of climate trends that influence the availability of freshwater shows that humans are responsible for 60% of the observed changes.

Another effect of global warming is more bugs, not just disease-carrying bugs. When I went to Idaho last summer, there were tons of dead trees, killed by bark beetles that weren't killed by cold temperatures in the winter. The dead and dying conifers and dry weather create a forest that is essentially a explosive mixture. The forest fires will only get worse in the next few years (that is, until the fuel is all burned up).
Posted by Sorghum Crow at 10:49 AM

When I lived in South Texas, we'd always hope for a couple of good frosts so the bugs wouldn't be so bad in the spring/summer. The other day when it was about 45 degrees in Central PA, I found myself hoping for the same thing.

As frightening as this climate change is and will continue to be, it's even more frightening that there are still people who don't believe it's happening.

the rape of the environment is just stunning.....

but those repubs --- it is NO big deal

No doubt they have first rate landscapers for their gated communities, DCap. Wonder how they are going to get around breathing our common air and drinking our common water. I bet Halliburton will come up with a solution, so no worries.

There's nothing like taking a break from plowing 5 foot deep north Idaho snowdrifts to read blogs, to be reminded of the tindery summer ahead. Restful it isn't!

We used to marvel at summer days that got over 100 degrees; that has changed to the point that last summer we had 6 weeks of it.

A couple of summers ago some teenagers set off a fire that burned down the entire town's watershed (the sides of two entire mountains)--was like looking into the mouth of hell.