The gorillas are doing it 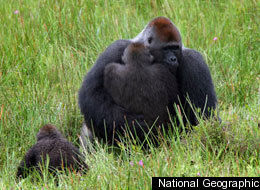 Lowland gorillas had never before been seen mating face-to-face, and no wild gorilla had ever been photographed using this behavior, the Wildlife Conservation Society announced. The mating style, though, is seen among gorillas in captivity. (Read full story.)

Perhaps just as surprising, the female in these 2005 photographs—Leah, named after Star Wars's Princess Leia—is also the first gorilla to have been seen using a tool in the wild.

I will not even make a comment on Leah's tool using.
Posted by Sorghum Crow at 3:23 PM

Where do gorillas buy batteries?

Female chimps are known to use long sticks as probes, too. But I won't bother you with tool using articles...

Wow who would have thought that Planet of the Apes was a cautionary tale.

Leah's clearly not in Texas.